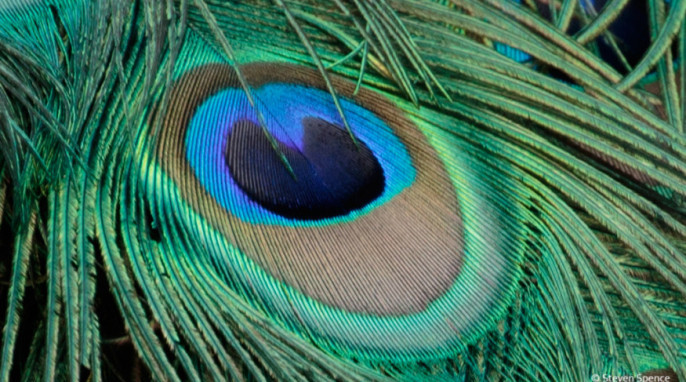 Pimping Your Ride, the Natural Way

If you are familiar with Pimp My Ride, a TV show about customizing old cars, you will know that one of the key elements in each customization is a bold paint job. It turns out that nature is ahead of TV.

Biomimetics is the science of harnessing (or mimicking) nature in the design of human-engineered products. Aircraft wings have been improved with inspiration from birds, bats, and even sharks.  Geckos and their amazing gripping properties have inspired the development of adhesives and robotics. Structural coloration, as found in butterfly wings and bird feathers, is also inspiring work in optical computing, thin film optical coatings, and color-changing paints.

What if I Told You a Peacock is Brown?

Peacocks are known for their bright colors, but when their feathers are wet they appear brown. This indicates that the bright colors aren’t a result of pigmentation: something else is going on. Indeed, the peacock achieves its stunning plumage display through structural coloration, more commonly known as iridescence.

A surface is said to be iridescent if it appears to shift colors as the angle of illumination changes. Structural coloration results from a lightwave interaction with a structure of similar size or half of the size. The light can be reflected, refracted, or sometimes both, and the effect is angle dependent, according to Bragg’s law.

Thin film interference occurs when light reflects off the top and the bottom of a nano-scale layer. A common example of this is light hitting a film of oil on water. Light is reflected once from the oil on top of the water and a second time from the water-oil interface. Soap bubbles are another example.

Is Color a Wave or a Particle?

We won’t come close to settling that question right now, but don’t miss the first photo of light behaving as both a wave and a particle. For our purposes, here, light is behaving as a wave. Unlike the chameleon, our peacock makes use of 2-D photonic crystals. Photonic crystals are structures that allow transmission of light only at certain frequencies. To function, the structures need to be approximately half the wavelength of the light transmitted.

The Secret of a Peacock’s Colors

A peacock’s feathers have barbs. Each barb has a flat array of flat barbules, structures which disperse the incoming light and create the coloration we see. The peacock’s blue, green and yellow barbule structures are nearly square.

Scientists have recently discovered that the brown structures are also caused by photonic crystals of a rectangular shape and not pigments as previously thought.

Besides peacocks many other birds have iridescent plumage– starlings and ducks are other common examples. Among insects, structural coloration gives some butterflies, flies, wasps, and beetles a bright, metallic sheen.

Structural coloration has multiple applications in optics and photonics. Distributed Bragg Reflectors (DBRs) have applications in fiber optics, lasers, and optical computing. Thin film layers can be used in anti-reflective coatings on lenses, filters and mirrors. Iridescent paints may be used for cars, but may also provide a new level of intensity and depth to art works.

Even the Resilient Tardigrade Has an Achilles Heel

Are Hydropower Dams the Future of Energy?

Citizen Science is for Lovers this Valentine’s Day!

January 31, 2020January 28, 2020 Science Connectedbirds, citizen science, ornithology, owls
By Bob Hirshon @BobHirshon Sunday, February 2 is the most exciting day of the year for owl-lovers all over the world:...