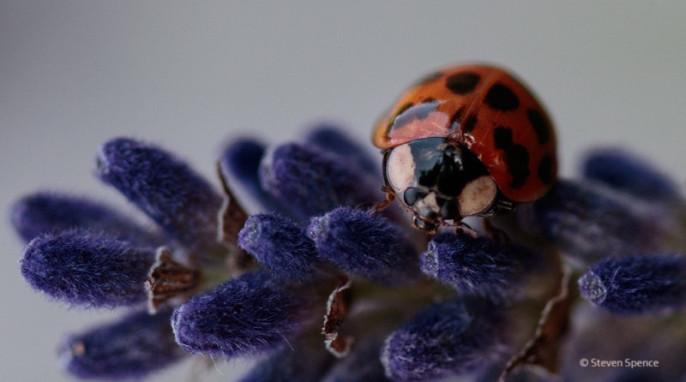 Sheep and Wolves in your Garden

Sheep and wolves in your garden? It’s more likely than you may think. Aphids (leaf lice) are pests, which are tended by shepherd ants, and ladybirds are voracious wolves that will quickly thin the herds.

Do Pests = Pesticide Use?

Just because pests are on the loose in the garden, it doesn’t mean you need to resort to chemical warfare with commercial pesticides, the use of which should be avoided on any plants you might eat.

We know that the use of certain neonicotinoid pesticides and some fungicides have an impact on bee populations, but other commonly used pesticides may be harmful to humans as well. Pyrethrum, an insecticide derived from dried chrysanthemum heads, has been extensively used as a natural pesticide against lice. A synthesized version of the compound is used to produce Pyrethroid pesticides, which use the same compounds (pyrethrins) and additional chemicals to enhance the toxicity to insects. The use of these chemicals near water is problematic, because they are very harmful to amphibians and fish. But, while pyrethrin compounds are a fairly low toxic risk to mammals, they may produce allergic reactions and asthma in susceptible humans. Some studies have also indicated the pyrethroid compounds may adversely affect human hormone levels and sperm quality. Pyrethrum may also be carcinogenic, so handle with care.

Some garden plants may inhibit or repel pests. Chrysanthemums and lavender plants are often cited as effective. Personally, I have found that mixing lavender with roses seems to keep aphids in check. Lavender is a good choice because the bees love it, it blossoms long, and it smells nice (to some, at least). Other suggested plants include, but are not limited to:

Soaps have been used against insect pests for 200 years. Anti-insectal soaps are selective insecticides with minimal impact on other organisms. A dilute compound (~2%) must be applied to the infected area with a brush, cloth or spray. Aphids, mealybugs, psyllids, and spider mites are most susceptible to soaps. While it is possible to make effective compounds using household soaps, be aware that some plants (such as sweet peas and cherry trees) may be harmed by the application of a harsh soap. It is recommended that you use specially developed soap sprays that can be purchased from garden centers.

Stinging nettle insecticide is a good option for aphids. Be careful making this, for obvious reasons! Fill a bucket with nettles, cover it with water, and leave it to ferment for 2 to 3 weeks. At the end of this time, empty the fluid through a strainer into a spray bottle and mix with water (1 part stinging-nettle fluid to 7 parts water). An alternative recipe recommends chopping the nettles, soaking them for 24 hours and then using the filtered fluid at 5% (1 part nettle fluid to 19 parts water). Either way, be sure to wear gloves and eye protection when spraying it onto insects.

Rhubarb leaves are also good against aphids, but DO NOT use on plants you intend to consume! Also DO NOT use if you have a dog, which might lick the plant. Boil 8 liters of water and add 1 kilo of rhubarb leaves. Let stand for at least 24 hours then filter as with stinging nettles. Why the caution? The effective compound in rhubarb leaves is oxalic acid. It’s also found in spinach, cocoa and tea. We can consume and metabolise small quantities, but in larger doses it is poisonous. Use a mild solution of rhubarb leaf fluid of between 2.5% (1 part solution to 39 parts water) to 3.3% (1 part rhubarb leaf fluid to 32 parts water).

Essential oils derived from plants are also effective insecticides: rosemary, eucalyptus, cloves, thyme, mints, lavender, rose, patchouli, geranium, sandalwood, and lemongrass are all good sources. They exhibit rapid neurotoxic action against some pests while generally having low toxicity to mammals, birds and fish. These compounds are generally short-lived and thus not used in commercial pest control, but they can be quite effective for use in a garden with topical application on a daily basis.

Lacewings, predatory mites, Anthocoridae (pirate bugs) and ladybirds are all common predators of insect pests such as spider mites and aphids. Since soap solutions aren’t recommended for all plants and trees, ladybirds may be an option for countering aphid infestation.

Ladybirds (Coccinellidae) are a type of beetle and not a bug as the alternative name ‘ladybug’ implies. A ladybird’s prey, an aphid, is an example of a true bug, which is characterized by having a proboscis to pierce a plant and drink its sap.

Ladybirds are highly effective against aphids and scale insects. They will lay 600-700 eggs in batches of 40-50 close to the pests. Between 4 and 10 days pass before the eggs hatch. Upon hatching, the larvae begin consuming the pests. During their larval stage, ladybirds will consume 600 aphids each. Adult ladybirds will consume 60 aphids per day, living as long as 2 years and mating every 2-3 days.

In the two-spot ladybird (Adalia bipunctata) native to the area in which this author lives, 90% of the beetles are female. This is due to a particular symbiotic bacteria living in the female ladybird’s reproductive system called bipunctata.

Keeping the Ladybirds Around

If there is a sustainable food source, such as aphids, at least some of the population will remain for the duration of a predator-prey cycle. It is also possible to influence ladybirds to stay in the area by providing appropriate wintering locations for them to hibernate. A south-western exposure is typically preferred, as it provides the best warmth. If the aspect isn’t favorable, a good alternative is to create an “insect hotel”, using several pine cones in a wire or plastic net that is positioned facing the south or west. Often ladybirds release a pheromone when they have found a good location and other ladybirds will congregate to the same spot.

Pyrethroids: Not as safe as you think

Steven Spence is an EH Science contributing writer and photographer. EH Science translates complex research findings into accessible insights on science, nature, and society. For the latest science news, follow on Twitter, Facebook, Google Plus, or subscribe to our science newsletter!