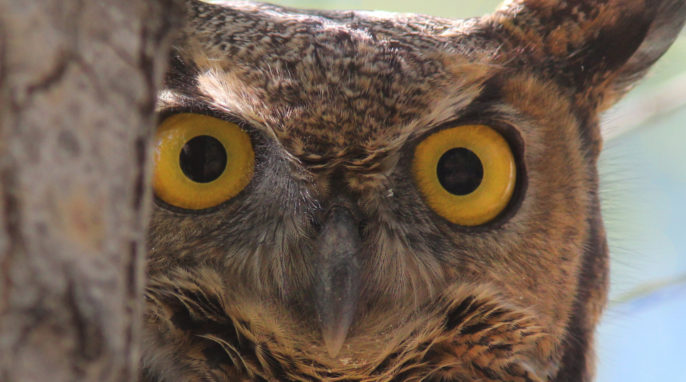 Powered flight has arisen independently on our planet a total of five times: in insects, pterosaurs, bats, birds, and, of course, human beings. A suite of highly specific characteristics is necessary for the defiance of gravity, from lightweight, lift-generating surfaces to precise sensing devices. But dragonflies and F-16s notwithstanding, nothing has conquered the skies quite like the bird.

For us—clever, indeed, but weak, fragile, and relatively blind—it should come as no surprise that the vision standards for becoming a US Air Force pilot are remarkably stringent: no color blindness, no abnormal refraction or accommodation issues, and corrected 20/20 vision. In order to fly a jet, a strong and responsive visual system is absolutely paramount, because a single mistake in judging distance, depth, or timing could spell instant death. This also applies to flight in the animal kingdom, where the unforgiving demands of flight have led to an astonishing diversity in form, function, and style.

Nowhere is this more apparent than in the avian visual system, which has adapted to a dazzling array of niches, habits, and lifestyles. An F-16 weighs close to 20,000 lb and can achieve Mach 2 at altitude. This incredible speed is controlled not just by a thinking human but by a suite of sophisticated instrumentation, including pitch controls, stabilizers, and radar. A real falcon, by contrast, can hit 200 mph in a dive and only weighs about 2 lb. But a falcon’s instrumentation, no less sophisticated, exists entirely within the confines of its neural circuitry, an enormous amount of which is devoted to the eyes. The visual apparatus of a bird represents the most elaborate, the most acute, and the most versatile of any eyes on the planet, and it’s one of the many adaptations for flight that has made the group so successful.

Falcons and other birds of prey represent the upper end of what seems possible for animal vision, and their eyes are highly specialized for a unique predatory lifestyle on the wing. But this specialization must be based around a common model.

All vertebrate eyes descend from a common ancestor, and most of them share a number of basic qualities. Bird eyes, like ours, function by admitting light through the transparent cornea, lens, and vitreous body to stimulate photoreceptors on the retina at the back of the eye. Each retina has at least one fovea, a densely packed concentration of photoreceptors that’s responsible for sharp central vision. These receptors are specialized neurons classically divided into rods and cones, named for their shape and adapted to handle the value and color, respectively, of our visual environment. These receptors translate light energy into neural impulses by the differential bleaching of photopigments. Cone cells, for example, transduce photons into neural impulses via three classes of photopigments—called photopsins—each of which absorb a different range of light wavelengths.

This three-part sensitivity results in millions of combinations that we perceive as colors, not unlike the way in which computer monitors may display images based only on the axes of red, green, and blue. The “perception” part of vision doesn’t begin until these neural impulses, coded as cascades of electrical signals, travel from the retina to the brain. Since eyes can contain an extraordinary number of photoreceptors and they can’t all connect directly to the optic nerve, receptors are connected by a smaller number of ganglion cells, which pool visual input and transfer the consensus along to the optic nerve and onward to the brain. This model of the visual system takes on countless tweaks throughout the vertebrate lineage, but these basics are largely consistent.

Before Birds Were Birds

Birds are archosaurs—the group of diapsid amniotes that includes crocodiles, pterosaurs, and dinosaurs—and these split off from the rest of the reptile lineage by the early Triassic, around 250 million years ago. Birds would therefore be expected to share features of the visual system with reptiles that they don’t share with mammals, and indeed they do: most notably, birds and reptiles both have four types of color receptors (cone cells) in the eyes, rather than three, as in mammals. This enables them to perceive part of the ultraviolet spectrum of light, invisible to us, as well as to detect polarized light and even magnetic fields. Bird eyes also lack the spherical shape familiar to us in mammals—instead being flatter, allowing for a larger in-focus visual field—and are held immovable in their sockets by circles of bone called sclerotic rings, both traits shared with their reptilian brethren.

The archosaurian origin of birds has implications for the dinosaur visual system as well. While we can never expect the delicate soft tissue of eyes and brain to fossilize, we can observe that many of the smaller, bipedal carnivores had very large  eye sockets, a binocular orientation, and sclerotic rings. Some of these bird-like carnivores have been subjected to color studies that examine the similarity between fossilized pigment cells and these cells in modern birds. In this way, we can predict their color pattern in life. Microraptor gui, for instance, was a small, four-winged dromaeosaur dinosaur that was probably glossy, shiny, and iridescent—a feature unlikely to evolve in an animal that can’t also see iridescence. We can be almost certain that these dinosaurs had vivid color vision, a prediction backed up both by phylogenetic bracketing and empirical fossil evidence. We have little indication, however, of unique adaptations in non-avian dinosaur vision, and even the least specialized of modern flying birds have extraordinary eyes.