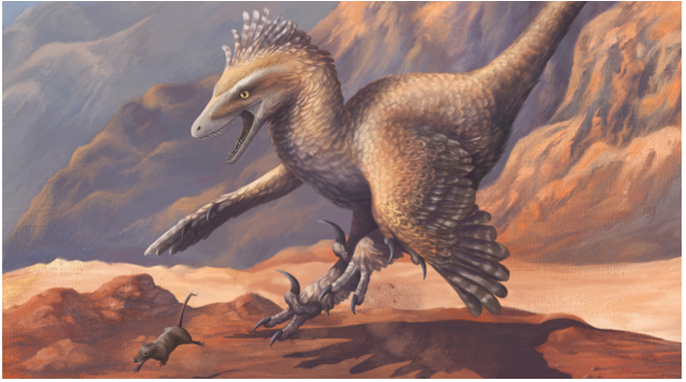 Velociraptor! The name strikes excitement into the hearts of dinosaur enthusiasts far and wide, just as the coyote-sized predator’s fearsome visage would’ve excited its contemporaries.

Oviraptor, Protoceratops, Pinacosaurus and many others lived alongside this dromaeosaur in the windswept deserts of Mongolia in the late Cretaceous period, about 71 to 75 million years ago. Its ecosystem occupied a region of today’s Gobi Desert known as the Flaming Cliffs, a veritable hotbed of fossils valuable to local markets and to science alike.

Thanks to the little fellow’s charisma and a healthy dose of pop culture influence, Velociraptor has earned a place as one of the most well-known dinosaurs today. Few people, however, are familiar with the strife caused by fossil poaching in rural Mongolia. This practice hurts both the scientific endeavor to describe these fossils and the local citizens, whose communities should be able to benefit from the riches locked away beneath their land.

Unfortunately, greed and self interest have driven an increasingly lucrative black market for Mongolia’s fossils, and many wonderful fossils have been cut off from the benefits of preservation and public display.

But all is not lost. Beginning in fall of 2016, an expedition led by the nonprofit Institute for the Study of Mongolian Dinosaurs (ISMD) will combat fossil poaching in rural Mongolia. The ultimate aims are to preserve fossils such as Velociraptor and to educate local people about the value and significance of these fossils. The ISMD, led by paleontologist Bolortsetseg Minjin, also helps to repatriate illegally exported fossils and will be extending science outreach events and education via a mobile museum. A long-term goal of the institute is to build a permanent museum in the Gobi desert.

All of these goals are very ambitious, and will not be easy! That’s where you, kind readers, come in. We are raising money for this endeavor through an IndieGoGo fundraising campaign. Contributions will fund a four-week expedition to conserve fossils, educate children, and travel to various communities near important fossil sites. The following list is taken from the campaign website and outlines what your contribution will be used for:

Donations of as little as $5 will secure your name on the website as thanks. Contributions between $10 and $45 will get you stickers, mugs, T-shirts, and posters, all featuring scientifically accurate artworks of the incredible dinosaurs that once called Mongolia home. Larger donations are rewarded with a variety of fossil pendants and reproductions, including Allosaurus claws and Stegosaurus plates, and $160 nets a framed Velociraptor canvas print, featuring my paleoart.

I am tasked with creating the paleoart that will accompany the website and merchandise associated with the campaign. For a generous $1,200 donation, I am offering an exclusive commissioned artwork of any dinosaur of your choosing! This will include a fully-colored background and is available either as a high-resolution digital image or a physical painting to hang in your house. Samples of my work, for interested parties, can be found here.

[tweetthis]Greed and self interest have driven an increasingly lucrative black market for Mongolia’s fossils.[/tweetthis]

The importance of this campaign cannot be overstated. With less than two weeks left in the fundraiser, we are still in desperate need of support and signal-boosting. In addition to awesome merchandise and original paleoart, a contribution of even just a few dollars is a way to show you care about combating fossil poaching and, more importantly, it actually makes a difference. Your contributions go directly to educating rural communities and conserving fossils. These beautiful specimens and their eons-old secrets need our protection now more than ever.

Emily Willoughby is a writer, paleontological illustrator, and nature photographer with a passion for anything and everything with feathers. Her work—ranging from paleoart to science communication on evolution—has been featured in journals, books, and museums around the world. More of her work can be found at emilywilloughby.com.