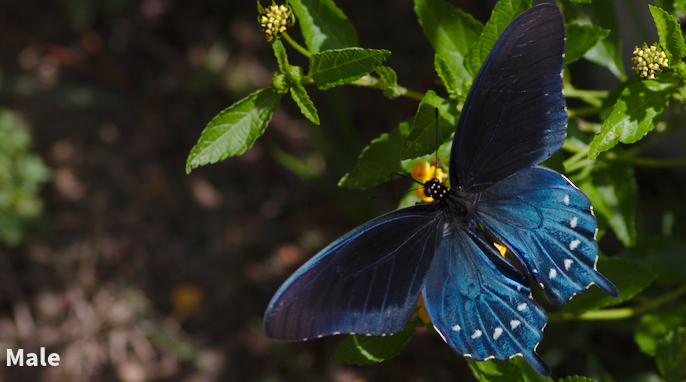 The pipevine swallowtail butterfly, Battus philenor, is a relatively small black swallowtail with gorgeous, iridescent blue scaling. It measures approximately 7–10 cm (2.75–4 in) from tip of wing to tip of wing. It is commonly found in the Deep South, but during the summer you can find it in the Southwest, including parts of California, and from Kansas to New York.

Last year I planted woolly Dutchman’s pipevine, Aristolochia tomentosa, to attract this butterfly to my garden. I was rewarded at the beginning of summer with a female pipevine swallowtail laying eggs on this plant. The woolly Dutchman’s pipevine is one of several plants in the Aristolochiaceae family that this butterfly will lay her eggs on. All butterflies lay eggs on the plants that their larvae can eat—the host plant.

What is even more fascinating is that the toxin remains throughout the entire life cycle of the butterfly. So when the caterpillar goes through metamorphosis, the resulting butterfly has the toxin. Even the eggs have the toxin! In butterfly form, the pipevine swallowtail deters predators by secreting the liquid through a gland on its abdomen. Like its larvae, the pipevine swallowtail butterfly has tough skin, which allows it to survive being tasted by a predator.

[tweetthis]Have you ever seen a pipevine swallowtail butterfly? They are toxic beauties![/tweetthis]

This butterfly is so toxic that even the parasitoid wasps that use the caterpillar form of many butterflies as hosts for their offspring leave the pipevine swallowtail caterpillars alone. Unfortunately, there is one predator that isn’t affected by the toxins—the green anole, Anolis carolinensis (an arboreal lizard), is known to prey on the larvae.

As I mentioned earlier, even the pipevine swallowtail’s eggs contain the toxin. To accomplish this, the female butterfly lays unfertilized eggs that are fertilized and coated protectively during the laying process. This takes longer than laying already-fertilized eggs and means that the mother is exposed to danger for a longer time while she remains motionless, but evolution suggests that the benefit to the resulting caterpillar is greater than the danger to the mother.

Tasting bad is not the only defense that the pipevine swallowtail butterfly has. Once the larvae hatch from the eggs, they remain together feeding as a group. As the larvae get older, they split off and feed alone, but by then their bodies have the visual clues that tell predators the larvae should not be messed with. The color of their bodies is a deep, velvety maroon with bright orange spikes that announce their toxicity.

I was able to see and capture images of this butterfly laying eggs and to follow the resulting caterpillars through their different stages. The pipevine swallowtail butterfly larvae go through five stages known as instars. The caterpillars molt their old skin in each instar, and each instar is unique. Not only are the larvae bigger, but often the coloring and markings are different. In some of the pictures, you can see the old skin. Once it is time to form a pupa, the caterpillar stops eating and disposes of any undigested food. It will then usually leave the host plant to find a good site to pupate. The caterpillar spins a bit of web to anchor itself to a plant or other structure, then spins a girdle that goes around the top of the body and attaches to the structure. This process takes about two days. The pupa stage takes about two weeks before a butterfly emerges.

The whole process of metamorphosis—from egg to larva to pupa to adult—takes about 33 days. Unfortunately, my larvae only made it to day 25. By day 14, only two were left. On day 25, only one was left, and on day 26, I could not find it anymore. I blame it on the anoles. There are many green anoles in my yard, and they seem to be the only animals that will eat the pipevine swallowtail caterpillar. Luckily, I still have a chance to see this process again. In Florida butterflies emerge, mate, and lay eggs several times throughout the warmer part of the year. Each emergence is known as a flight, and I can expect at least two more flights this year. I can only hope that a female who is ready to lay finds my woolly Dutchman’s pipevine plant.

You can watch the whole cycle at https://www.youtube.com/watch?v=u2cE86AA1q0.

—Yvi San found a love for birds and butterflies and picked up her camera to document what she saw. She shares the images and what she learns about the subjects with her followers on Google+.

Scott, James A. The Butterflies of North America: A Natural History and Field Guide. Stanford: Stanford UP, 1986. Print.

Asthma, Genetics, and the Environment

Anthropocene mass extinction: are we there yet? 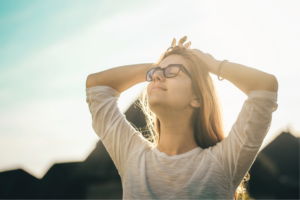