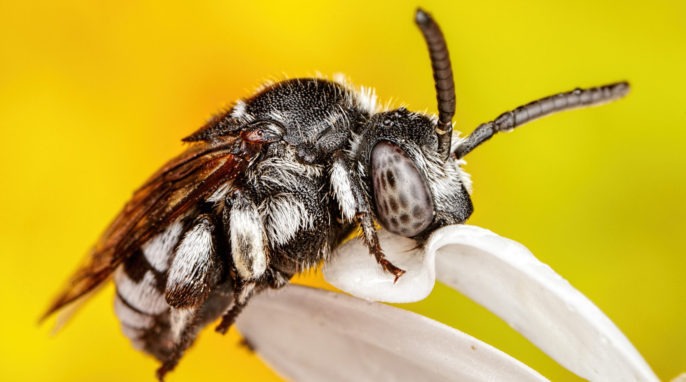 When we think of bees, most of us picture honeybees or possibly bumblebees. In fact, there are over 20,000 species of bees. Some are social, such as honeybees and bumblebees, while others are solitary. Bees typically build nests, collect pollen and nectar, and care for their offspring. Some bees, though, do not busy themselves with these things; instead, they move in as parasites, taking over other bees’ nests. Estimates based on surveys of North American bees indicate that as many as 15 percent of all bee species may be parasitic. A recent study focusing on wild bee species in Paris, France, found that 5 percent were parasitic bees [1].

Reading that 5 to 15 percent of bee species are parasitic, we might think that we ought to see these bees everywhere. Actually, we do encounter them, but most of us don’t recognize them. One reason is that the number of species doesn’t measure how many bees of each species are out there. In the Paris study, only 1.2 percent of all the bees collected were parasitic despite representing 5 percent of the species. Another factor to consider is that we are most likely to take note of easily recognizable honeybees and big fuzzy bumblebees, but there are many more types of bees around us. The majority have solitary lifestyles that do not capture our attention the way social bees do as they fly in and out of the colony in numbers. Additionally, most of these parasitic bees look quite similar to their target hosts. The main difference is the lack of hairs for carrying pollen baskets on the parasitic bees’ legs.

Bee species that are parasitic by thievery are known in the scientific literature as kleptoparasitic (or cleptoparasitic). They are more commonly referred to as “cuckoo bees” [2]. Like the cuckoo bird, these bees lay their eggs in the nests of other bees.

When targeting the nest of a solitary bee species, the cuckoo bee finds a suitable spot, waits, and observes. Once the potential host has established and provisioned the nest, the cuckoo bee waits for the host bee to go out. The cuckoo bee enters the nest, lays an egg, and leaves. Her egg develops faster than that of the host species. This larva devours the pollen and nectar stores intended for the host bee’s larvae—and will also consume the host larvae.

Taking on a social bee colony is much more complex. The cuckoo bee has to select a colony of the right size. Taking over a colony cannot happen without the cuckoo bee fighting and killing some of the worker bees. If she picks too small a colony, there might not be enough workers left after the takeover to feed her and her offspring. If she picks too large a colony, she may be overwhelmed by the number of worker bees that oppose her.

In a study of parasitic bumblebees [3], scientists captured multiple days of interactions on video. What they saw confirmed that parasitic bees find their targets using their sense of smell. The parasitic bumblebees could even identify the ages of worker bees by smell. That may seem surprising, but bees (along with many other insects) make use of pheromones, which are chemical scents, to trigger various behaviors. Pheromones may be used to trigger alarms reactions like swarming an attacker, to leave food trail markers, to trigger other individuals to feed another, to attract mates, and even to suppress ovulation in worker bees.

Knowing the worker bees’ ages was important for the cuckoo bee because older workers were more likely to oppose her. Once the cuckoo bee has gotten rid of the most aggressive opponents, she threatens and intimidates the other workers instead of killing them. She grabs them and shows them her stinger, but does not actually sting them. This display of dominance is enough to pacify them, allowing her to remain in the colony alongside the queen.