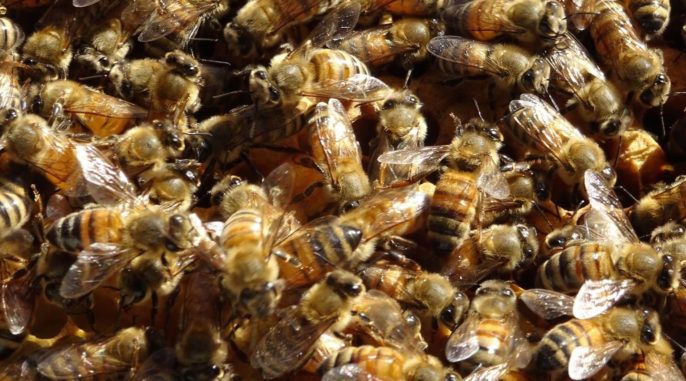 Andy Zaayenga was “that guy” who introduced himself to new girlfriends by warning them about the 11-foot boa constrictor he kept as a pet. Not being okay with Andy’s love of all types of animals was a relationship dealbreaker. But despite Andy’s affinity to creatures big (especially in the case of the boa constrictor) and small, Andy’s career took him away from the animals and towards the inanimate. He’s spent most of his career repairing, selling, and developing automated solutions (a.k.a. robots) that doctors use to treat patients and researchers use in their work. He is currently the managing director of the consulting company SmarterLab and helps scientists figure out what robots they need to keep their labs going.

However, three years ago, Andy dove (fortunately, not literally) headfirst into a new hobby: beekeeping. His scientific background led him to study the intricacies of beekeeping, while his love of animals and the environment drove him to continue the pursuit.

[tweetthis]What’s all the buzz about becoming a beekeeper? Learn how one scientist got his start![/tweetthis]

GotScience had the chance to catch up with Andy at the International Society for Biological and Environmental Repositories (ISBER) annual meeting, where Andy was actually one of at least three beekeepers in attendance! (Even the hotel where the conference was held had several hives on the roof deck.) Over a glass of wine, we discussed why Andy chose bees and how his hives are doing.

Andy Zaayenga: Our family enjoys the outdoors in many ways: gardening, hiking, bird-watching, and cycling. We’re very aware of the importance of pollinators in the natural world. In the mid-2000s when colony collapse disorder (CCD) began to be reported, we became interested in beekeeping. The bee life cycle and hive social construct are fascinating, and as someone with lots of “unusual” animal friend history, I wasn’t hesitant about handling bees. It took about ten years before we took the plunge into bee wrangling! It’s a hobby best entered into with preparation, so we first took several beekeeping courses, joined some internet forums, and then purchased our first nuc (a viable working hive with queen, workers, and brood) three years ago.

GotScience: You’ve mentioned that part of the reason you started keeping bees was to help the environment. Can you tell us more about why bees are so important in our ecosystem?

Zaayenga: Honeybees are pollinators, as are 4,000 other bee species just in North America. So are many wasps, flies, ants, butterflies, and moths, as well as some beetles. Pollinators move pollen from the male anther of one flower to the female stigma of another flower while collecting nectar and pollen from plants. Without pollinators, not only would our natural world look bleak, but our food supplies would collapse. Pollinators are required across our agricultural processes. When we heard about CCD and the mite plague, we wanted to do something to help the honeybees survive.

GotScience: Most people have heard in the news about bee colony collapse, and unfortunately one of your colonies collapsed a few years ago. What causes this collapse and how do you try to prevent it in your hives?

Zaayenga: Actually, when I lost my hive, it was due to mite infestation. Colony collapse disorder is a bit more mysterious. In CCD, almost all the worker bees disappear and leave behind a viable queen, brood, and food stores. CCD has been blamed on many things, from pesticide use to climate change. However, the exact cause is still not clear.

The Varroa destructor mite is a bee parasite introduced from Asia in the 1980s. As is the challenge presented by many nonindigenous invaders, the established honeybees have few defenses against the Varroa mite, and a colony can be overrun to the point of unsustainability. The population drops low enough that the hive cannot defend itself against ants, wasps, and even honeybees from another hive that enter and steal food stores.

GotScience: A lot of people are concerned about the use of pesticides in gardening and beekeeping. How do you handle this, especially considering those invasive mites?

Zaayenga: That’s a great question and one with a lot of heat in the beekeeping community. We started out with the desire to be totally “organic” beekeepers—no chemicals of any kind and little intervention in the hive life cycle. We lost our hive because the mite infestation killed so many bees that the hive was taken over by wasps and ants. We have now taken one step up the chemical ladder by judiciously utilizing oxalic acid vaporization (OAV) to control the mites. OAV raises the acidity in a hive enough to kill mites but not harm the bees. Oxalic acid is commonly seen as wood bleach in your paint store. It is not a persistent chemical and is very safe to use as long as you don’t collect honey from the hive for your consumption too soon after a treatment.

GotScience: You recently split your hive. How do you do that? And does the new hive have a queen yet?

Zaayenga: About a month and a half ago, we did a walk-away split. That’s when you pull out around six frames from a strong hive and put them into a new box. You pull out some frames with eggs, larva, and capped brood with lots of nurse bees, as well as frames with honey and pollen stores. Our one remaining hive from last year came through the winter wonderfully and was strong enough to contribute. The bees in the new hive immediately sense that there is not a viable queen in the box, and usually will set about raising a new queen from one of the existing eggs. We looked in the hive last week, and, while you don’t always see the queen among all the worker bees, if you see eggs you know that you have a laying queen. And we did! There were eggs and larva, so somewhere in there is a fertile mother.

GotScience: What advice do you have for someone who wants to start keeping bees?

Zaayenga: The beekeeping courses are a great first step. We took our courses at Rutgers University and through the local gardening organizations. There are forums on Facebook and all over the internet full of experienced beekeepers who are very welcoming to “new-bees.” We also joined our local beekeeping club before we started beekeeping. That’s where we met the woman who sold us our first nuc, and she has been a mentor since then. It’s a hobby full of nice people. We often say it is one of the best things we’ve done in the last ten years—a hobby that helps the earth and provides hours of fascination to boot!

—Dr. Cathy Seiler is the manager of the Biobank Core Facility at Barrow Neurological Institute and St. Joseph’s Hospital. She received her bachelor’s degree in biochemistry and molecular biology at Boston University and her PhD at the Watson School of Biological Sciences at Cold Spring Harbor Laboratory, studying cancer. In her spare time, Cathy is the editor for ISBER News and writes about science and the life of a scientist on her blog Things I Tell My Mom.

Featured image: Andy’s bees. All photos in this articles are by Andy Zaayenga.